Posted on April 8, 2013 by northernrockiesview

It was an epic, record-setting year for Vert on the Big Mountain.  A hearty congratulations to Tony Cooper, your new all-time Vert Single-Season Record Holder~! He skied an amazing 5,612,746 vertical feet. 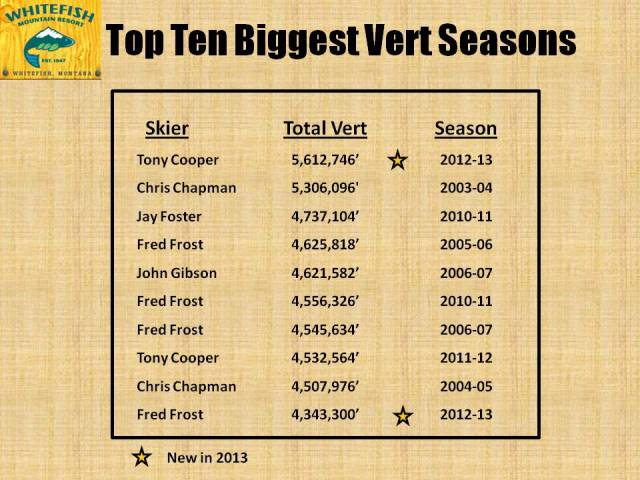 And to put things in perspective, Chappy skied his record year in a 139-day season.  Tony had 121 days to work with.  Chappy had more days.  Tony had faster, more efficient chair-lifts.  Chappy had monthly and seasonal prizes as incentives driving the competition upward.  Tony had no similar incentives.  In both cases, the records were extraordinary feats of endurance and persistence, working thru whatever conditions the Big Mountain threw at them.   They both skied thru the blisters, hot-spots, the aches and pains that skiing 50,000+ feet days, day after day, bring as a normal by-product.  My hat is off to both of them.

And while I’m at it, my hat is also off to Fred Frost.  He joined the ranks of the “skiing for free” crowd (as a Super Senior) this season and promptly bumped my 2007-08 season out of the Top 10 Biggest Vert Single-Seasons.  Congratulations~!  You now own four of the Top 10.   I assure you, the rest of us can only dream of being that prolific over time.