The Low Point of My Summer

Posted on August 19, 2010 by northernrockiesview

… When the Mariner’s Give Up 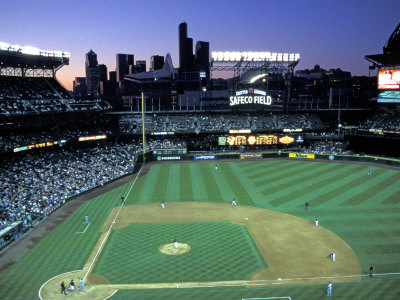 everywhere.  Many get to hold onto that hope for the next six months or more.  And some of us are doomed to lose hope well before the season is anywhere near its conclusion.  With some 40 games left to go, my Mariners’ of 2010 are long, long gone.

It’s that time of year when some big-leaguers hearts (and careers) are broken and some kids from the Minor Leagues begin to live their dream.  In the first case, I offer my condolences to fellow Montanan Rob Johnson–sent back down to AAA after almost two full-seasons of big-league play.   He made roster room for Adam Moore to renew his quest for every-day Big League play.  One man’s demise is another man’s dream.

I understand the cycle.  I get the mechanics of it.  But I hate watching it.  I just can’t get as excited about seeing a (25 games under .500 Mariner’s) team trying new lineups each day. Sure, it’s great to see Tui (Mariner backup Matt Tuiososopo) have a great few days in Baltimore, as the Mariners won their 4th consecutive series since the end of July (no waiver) trade-deadline.  It offers perhaps a sense of vindication for the Front Office that change was necessary.

I just find it hard to believe that Don Wakamatsu was the problem. It is true, the Mariner’s never did seem to catch any spark all year under Wakamatsu.  They played poorly night after night.  They pitched well in stretches, but they didn’t hit.  And when they did occasionally hit, they just didn’t seem to pitch well that night.  It was a perfect storm of underachievement and everybody in the clubhouse had to feel it.   As a consequence, all press became bad press.  From the troubles with Milton Bradley’s anger-disappointment management, to the Junior napping during a game incident, to the Wakamatsu-Figgins spat, it was one negative story after another.   Like they were doomed to it.

Of course, Wakamatsu’s demise went down in classic, management fashion.  A mere day and a half prior to his “relief from duties,” General Manager Walt Zduriencik announced on TV that Wakamatsu was his guy and he was  sticking with him.  Upon hearing it, I told my buddy, “yep, he’ll be saying those exact words up until the day before he fires him.”

We had no idea that this exact scenario was to play out over the next two days.  I actually believed Zduriencik when he stood by Wak.  So, for the second time of the season, just as Ken Griffey, Jr.’s retirement came without warning, Wak’s firing hit me as a big surprise.   I took it as my cue to de-emphasize the Mariner’s watching of 2010.

And perhaps I should learn to see these “votes of confidence” press conferences for what they are—a possible harbinger of an imminent firing.

It’s too bad.  I liked Wak.  His calm demeanor exuded a sense of inherent baseball wisdom. Hell, last year’s M’s played well above their expected level.  He certainly deserved some of the credit for that.   I’m pretty sure he’ll land on his feet and contribute to some more good baseball elsewhere. To Wak, I say “best regards and good luck down the road.”

For whatever reason, this year’s M’s just haven’t jelled until the last 10 days or so.  And now, it’s too little, way, way, too late.  I still enjoy seeing Gutierrez,

Ichiro, Figgins and the gang play.  But, like the rest of M’s nation, I long for a playoff contending Mariner’s team.

Over last year’s offseason, the Mariners were one of the two most aggressive teams in the trade/free-agent market.   What was supposed to be the assembly of a contender, turned into this year’s disaster.   Now, with Wak and company gone, we again embrace the uncertainty of starting over.   Perhaps this off-season, the Front Office will focus less on quantity, and maybe a little more on quality.

And who knows, maybe this off-season will bring the next Jay Buhner-like acquisition—that guy that the other team’s management will kick themselves over for years about letting slip away.

In any event, I’ll begin next April with as much hope as ever—-unless the pundits have picked the Mariner’s to win, which is the veritable “kiss of death” for Mariner’s playoff hopes.   Let’s hope they pick the Rangers or Angels.  JDPF

This entry was posted in Major League Baseball and tagged Baseball, Mariners. Bookmark the permalink.

2 Responses to The Low Point of My Summer