Posted on May 8, 2016 by northernrockiesview

Once again, I present the Top 100 Vert Seasons list.

After 13 seasons of the Big Mountain Vert era, we have finally seen just how much can be skied in one season, thanks to Nebraskan Ken Jones.

Shattering the ceiling and rewriting the record book at the same time, Ken summited the Vertical Everest this past season.  Ken skied an astronomical 8,058,144 vertical feet, plugging himself on to this list right at the top.

His new record will undoubtedly occupy the top spot on this list for a long time to come.

At the same time, the minimum ante to get on to this list at the bottom, just went up about 58,000 feet.  It’s now approaching 2.5 million to get into this club.  After next season, it should be at least that.

A year ago, the Top 11 finishers of 2015 all made this list.  This season, by contrast, only the Top 7 made the list.   The hungry, heavy hitters keep pushing the upper portions of this list.

Anyone can do this….given the will, the opportunity, and a little luck.   But, now more the ever, if you want to break in here….you will have to set about doing it…and earn it.  No one casually skis 2.5 million vertical feet.

Are you up for it? If so, pretend we’re Missourians and show us.

Before giving you the list to peruse for yourself, again I offer some interesting facts.

33 people now own the Top 100 seasons.  Sandie Carpenter and Patrick Pinsent dropped off the list, while Ken Jones took the top spot.

13 dedicated skiers appear 3 or more times.  These people authored most of the rich, colorful history that defines the Big Mountain vert program.  By name (with number of times accomplished following in parenthesis), they are:  Fred Frost (13), Russ Carpenter and yours truly (9 each),  John Gibson (8), Rick Sawyer (6), Tony Cooper (5), Chris Chapman, Steve Calger & K Yobst (4 each), Albin Kwolek, Steve Cook, Pat King and Mark (aka John) Sanman (3 each).  Welcome Albin and Mark to the 3(+)-timer group.

And 14 people own one place in the Top 100.  They are:  Ken Jones, Travis Gray, David Thiel, Paul Badgley, Jim Bailey, Jeanne Reichstadt, David Keith, Rex Rupp, Mark Panicek, Paul Descoteau, Tom McCrea, Eric Walberg, Roger Elliot and Jim Robertson.  Some of these folks (Paul Badgley, Paul Descoteau, Mark Panicek) had previous seasons in the Top 100 that were pushed off the bottom of the list this year.  Such is the nature of records.

But enough analysis already.  See the list for yourself. 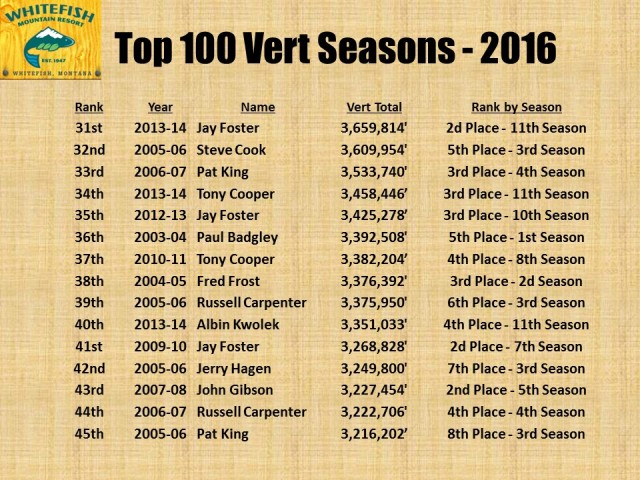 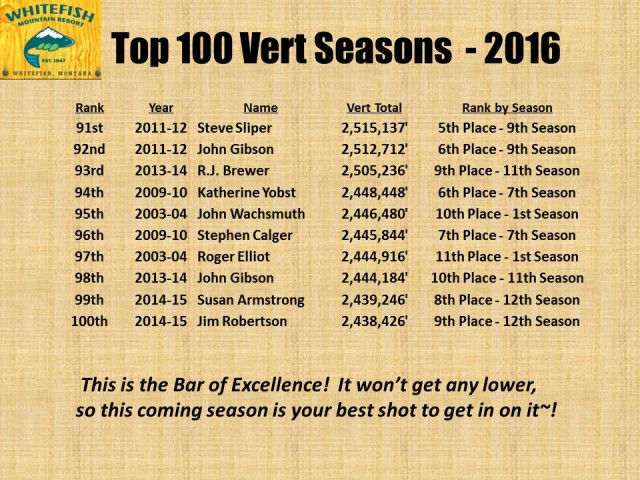 Once again, I invite you to take your shot at earning a place on this list.  Come and get it~!. The mountain regulars can be a welcoming crowd, while also a little bit like a middle school population.   They will discuss your ski skills, your ski habits, your ski attire, etc. They will see and notice whether you are pushing or not.  And if you are skiing your way onto this list, you will be noticed.  For better or for worse.

And once again, I solicit constructive inputs to correct or complete the record.  As always, just holler. JDPF

**-I remain unaffiliated with Whitefish Mountain Resort, while arguably continuing to be one of their most loyal and enthusiastic patrons.  It is a Big Mountain that we ski upon. And it is big enough for all of us and then some.   Come and ski with us~!**

This entry was posted in Vert Records. Bookmark the permalink.