Posted on June 14, 2012 by northernrockiesview 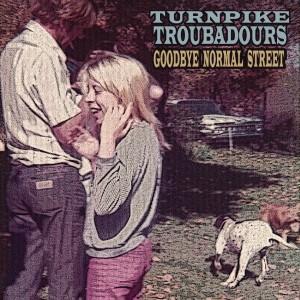 The Turnpike Troubadours are hotter than the Oklahoma August~!  And if that seems a bit much for you, you should at least concede that they are certainly smoldering, settled comfortably in their sweet spot.   And they are undoubtedly ready for primetime.   The band now is:  Evan Felker – guitar, harmonica, vocals; Ryan Engleman on lead guitar; Kyle Nix on fiddle, RC Edwards on bass, and Gabe Pearson on drums. Giovanni Carnucci, who played drums on Diamonds and Gasoline, is now playing with fellow Okemah resident and Red Dirt veteran, John Fullbright (who has also just released a new record, entitled From The Ground Up, which is also highly recommended by cousin Judi–my insider source for Red Dirt music-scene happenings).

On Goodbye Normal Street, Evan Felker and his compatriots have again proven their song-writing genius, bringing rural, hometown life to its logical musical accompaniment. Once again, they deliver music that we can’t help but sing and tap-along with.  From the opening drumbeat and banjo of Gin, Smoke and Lies, to the “ain’t no peaches falling from the trees that I’ve been shaking” on Quit While I’m Ahead, Felker and the Troubadours take you on a current, but nostalgia-filled journey thru Oklahoma, Arkansas and beyond.   They take us with them on their perpetual “Red Dirt”-based road-trip.

That trip though–makes you feel like you are a part of it.   Oklahoma hasn’t been more simply and eloquently represented since Will Rogers.  Seriously.  And I’m hoping they’re gonna break big—becoming household names just like Will Rogers did–on the magnetic simplicity of the truth.

The record is a start to finish listen.  There are no duds….but there are several stand-outs. Gin, Smoke and Lies leads off the record with “the rooster (who’s) got 20 gals and (is) happy as lark”…before descending into the deceipt and betrayal.   The drum, banjo, and fiddle absolutely evoke the story being told.  I hear it……. and “all I smell is cheap perfume, and gin and smoke and lies.”  This is the perfect song to open the record.

Morgan Street is another highlight.  And there aren’t many accordion-up front songs that you can say that about.   It captures my own long-held self-perception with it’s “me, I’m just a wallflower soaking up knowledge, with my heart on my sleeve and a beer in my hand.”  That was me for at least 25 years.  “The movers and shakers on Morgan Street (in Tahlequah)…..dance to anything with a good back-beat.”  Got me again.

Felker’s vocals offer unique phrasing, cadence and never fail to beckon you to join in.  His tone compliments and gives voice to the “every-man” nature of his song lyrics.  We listen and we just know these characters.   They might as well be us.  Hell, some of them are us.

It certainly feels like I know the folks in the two military-themed songs — Southeastern Son and Blue Star.   And the fellow sung of in Blue Star might well have been me.   “You’d be gone and you’d be leaving, you’d be back home again, Christmas or July 4th, I really don’t remember when” captures the perpetual move cycle inherent in military life.

“He was pushing 80, though he acted 22” is another familiar theme (in Before the Devil Knows We’re Dead.  Having skied 100+ days each season over the last five years, I know dozens of folks who fit that description.  Many retirees ski and live with an tangibly enviable zest.  And to a man (and woman), we all subscribe to the Troubadours notion — “raise another round boys, and have another glass, be thankful for today, knowing it’ll never last, and lets leave the world a’laughing when our eulogies are read, may we all get to heaven before the Devil knows we’re dead.”   Let the fiddler play a hoe-down indeed~!

Good Lord Lorrie is another captivating journey—this one about love gone wrong, a common Troubadour theme.   The harmonica here punctuates like Neil Young at his Harvest-era best.  And all of us know the Lorrie story–her dad thinks we aren’t good enough to “sit in the same room” with her…..and then later she proves to be less worthy than she initially appeared…as things go horribly wrong.

The Troubadours’ genius is not only in their ability to write songs about their surroundings and it’s inhabitants, it’s also in their ability to get that demographic on their feet.  This band gets the crowd stompin’.  Ask anyone who has seen them in a bar—since your author saw them after a University of Central Oklahoma football game (Mike, Judi, Greg, me….and three Chinese exchange students).  The Troubadours rocked that soccer field….and I knew that they’d totally kill at the Flaming Mug in Fayetteville (North Carolina).  They’ve just got to extend that Turnpike and get there.

In any event, the music business is a slog….a muddy, obstacle-ridden, and ever perilous grind. But half the battle is work ethic and the other half is craft and good content.  Felker and the Troubadours have conquered both parts.  It’s only a matter of time until the rest of Country-loving America will hear something that will sink the hook in them.  Give ’em some national exposure and in no time they’ll be playing the CMA’s and thinking “I guess we finally made it.”

I can’t wait to see that happen.   It will be their pinnacle “Goodbye Normal Street” moment.  And they will have earned it.  Judi was right from the get-go.

Get on board the Turnpike Troubadours bus.  You will see some colorful characters…..and you will be entertained.  Thanks again to Judi for sharing these Red Dirt encrusted gems~! These guys are worthy for the whole world to see.   And surely we’d rather the world know these guys….than let Tom Coburn or Jim Inhofe be the voice of Oklahoma.   We’ll certainly get more plain truth from the Troubadours.

Go Get ‘Em Troubadours~!  I can’t wait for the rest of the world to embrace your charm. Tahlequah will always feel like home, but Goodbye Normal Street is the right next step. Bring on the world as your next stage.  Knock ’em dead~!