Posted on November 2, 2011 by northernrockiesview 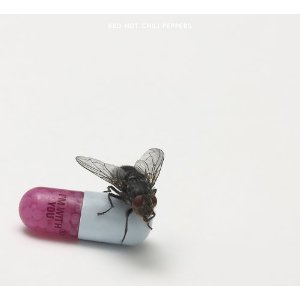 The Red Hot Chili Peppers are:
Anthony Kiedis on vocals,  Flea on bass, Chad Smith (also banging for Chickenfoot in his spare time) on drums, and Josh Klinghoffer on guitar.  Fundamentally, the Chili Peppers have always seemed to be at the intersection of Kiedis and Flea–who have considered each other “brothers” since sharing time at L.A.’s Fairfax High School.  Chad Smith has also been a long-term, predictably positive force in the band’s sound too.

For all Chili Peppers fans, I’m With You seems to be a big litmus test record.  The question coming into this album was, would it all work without Frusciante? John Frusciante was the band’s second lead guitarist, first joining the band after original guitarist Hillel Slovak died of an overdose in 1988.  Despite the circumstances of his opportunity, Frusciante himself walked straightforward into his own opiate addiction.  He left the band in 1992, replaced for one album (One Hot Minute) by Dave Navarro (of Jane’s Addiction and Rock Star INXS – Supernova fame).

After getting clean, Frusciante rejoined the band in 1998, at Flea’s request.  Frusciante’s sobriety enabled him to contribute enormously to the band’s most successful albums ever. From 1999’s Californication (which sold 15 million copies), through 2006’s Stadium Arcadium (the Band’s first #1 album), Frusciante’s guitar and backup vocal flourishes would help the band rise to these new heights.  The band’s most iconic jams (e.g. Californication, Dani California, Charlie, Wet Sand, Tell Me Baby, etc) all carried signature Frusciante solos and layered backup vocals (of his making) that took them rightfully into the modern rock stratosphere.  These were the songs that set the hook in me for good.

There was a collective sense among Chili Pepper Nation that you just can’t replace that level of creative input.  And it is true.  You can’t.  Frusciante’s input is missed.  But, surprise, surprise, the Chili Peppers still have that signature, unique sound.  Funky, groovy, intense and endlessly energetic, they still know what it is that they do….and do it with unparalleled zeal.  Even without Frusciante, the Red Hot Chili Peppers still deliver that sunny California disposition in musical form.

For all of my respect for Frusciante’s creative inputs and guitar skills, he wasn’t the best musician in the band.  That perch goes unquestionably to Flea.  Born Michael Balzary, the man who became Flea is simply, the most distinct and powerful bass player in music today. He is arguably in the discussion with Chris Squire (of Yes), for the best (electric) bass player ever.   I’m open for other inputs on this discussion point…but the fact remains, no one right now, plays as distinctive and powerful a bass line as Flea.

For every memorable, signature Red Hot Chili Peppers song built around a Frusciante guitar solo, there are two more built around an unforgettable Flea bass-line. The last minute of Charlie, the third song on disc 1 of 2006’s Stadium Arcadium, has one of my favorite bass-lines ever recorded, with Flea’s frantic bass-line competing note for note with Frusciante’s wailing lead guitar, with both underscoring and complimenting Kiedis’ climactic vocal ending.  Lead bass isn’t something band’s do–unless your bass player is Chris Squire or Flea. But, when he’s your guy, the policy should always be, unleash him and watch the fireworks ensue!  He is a fireball of seemingly boundless energy.

On I’m With You, Flea hits another home run, or series of them.  He and Chad Smith compliment each other like biscuits and gravy.  Their rhythm line’s are consistently that tasty.  Throw on some Kiedis vocals and you have a musical California breakfast bar–sunny, warm, a little nutty, but full of everything you might want to start a bright day.

I’m With You is full of rhythm section (Flea-Smith) highlights.  Monarchy of Roses, Look Around, The Adventures of Rain Dance Maggie, all deliver the signature Chili Peppers sound. The album’s first single, The Adventures of Rain Dance Maggie, features (on top of a deliciously hypnotic Flea bass-line) Chad Smith delivering the best cowbell in a song since Blue Oyster Cult’s Don’t Fear the Reaper–which became even more memorable after Will Ferrell’s unforgettable rendition on SNL with Christopher Walken.

Within weeks of the album’s release, Look Around was being used as an intro/outro during the Major League Baseball Playoffs–once again, making me think I could be a Producer for ESPN sports, picking jammin’ songs that players and audiences alike will enjoy hearing while they watch web-gem replays.  Good, brand-new music is money in that role.  Look Around was a great choice, while not necessarily being my favorite.

My favorite song on the album demonstrates new guitarist Josh Klinghoffer at his best. Goodbye Hooray is a frenetic, pogo-fest, another song driven by Flea and Smith’s pounding rhythm line. But, taking it to the next level, is Klinghoffer’s most incendiary, front and center guitar solo on the album.   It feels almost as if the intensity of Flea’s bass-line demanded the utmost from Klinghoffer–and he responded accordingly.

It has been said, while Klinghoffer played in support of Frusciante, with the touring Chili Peppers, that Klinghoffer never really went straight at his solos like Frusciante did. Klinghoffer purportedly plays a more understated, more circuitously approached version of lead guitar.   Whether intended or not, it’s almost as if he’s approaching his role with appropriate respect–possibly leaving a door open for Frusciante’s return.  Whatever the case, Klinghoffer fits the band nicely and he does justice to this record, no question.

Left out of the discussion thus far is Anthony Kiedis’ vocals.  Some have argued that this is his best, most melodic work yet.  And those making such an argument discussed an improvement arc in his vocals over the years and records.  For me, I haven’t heard any of that kind of distinction.  Kiedis’ vocals, for me, remain rock solid.  He was good in 1991 on Under the Bridge (from Blood Sugar Sex Magik), and he remains good now.  His distinctive voice, as much as any of the instrumentation, carries that funky, bubbly, California feel. Kiedis is certainly comfortable in his role.  He delivers a swagger commensurate to fronting a band with the vast technical skills of his band-mates.

Kiedis, a native Michigander before moving to L.A., also delivers geographic references in his lyrics/vocals (e.g. Especially in Michigan, Dani California, etc) with a frequency like few others. On this record, on Look Around, Kiedis gives a shout out to Fayetteville, singing “this one goes out to Fayetteville” rhyming it, in his own inimitable style with “it’ll come true if you say it will.”  That’s almost as cool for Fayetteville natives, as hearing We’re an American Band’s “all the Chiquitas in Omaha” changed to “all the Chiquitas in Tahlequah” was to us college punks in Tahlequah back in 1985.  “Woohoo, he’s singing about us” is the only logical conclusion.  Crowds dig it.  Kiedis knows this and delivers, time and time again.

I love a lot of bands for a lot of reasons, but the Red Hot Chili Peppers have their own unique place on that list.  Listening to the Chili Peppers always takes me to a happy place. I’m always upbeat while hearing them play. Flea is an amazing talent.  And Smith plays cowbell better than anybody since Will Ferrell, on top of being a top-notch all-around drummer.  It does my heart good hearing a band throw themselves into their craft.  And with the Red Hot Chili Peppers, commitment is never a question.  They are “all in, all the time.”  I suspect that that is the secret to their success.  When they stop doing that, it will be time to hang it up and walk away.  Until then, I’m with them.  What about you?

If you’ve liked any of the Chili Peppers previous works, then I’m With You is a record you might also like.  But, you’ll just have to see for yourself.  Or not.

This entry was posted in Music Reviews and tagged Music. Bookmark the permalink.