Posted on October 8, 2011 by northernrockiesview 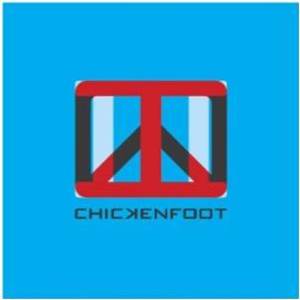 SuperGroup Chickenfoot has just delivered its SECOND studio album, released September 27th, 2011. Casting aside numerical convention, it is inaptly titled III, which is half again more than it needed to be. While they were ironically irreverent and unconventional with their titling, they were predictably straightforward with the music. Chickenfoot III rocks hard, picking up right where Chickenfoot I left off.  And yeah, I know.  Like Napolean’s Corporal, you were told there would be no math. I promise there won’t be any more.

Chickenfoot is Sammy Hagar, Joe Satriani, Michael Anthony, and Chad Smith.  They occupy an increasingly desolate niche in today’s music–your basic, 80’s style, straightforward brand of rock n’ roll.  You hear some of the same Van Halen-esque pomp and thump that Sammy Hagar and Michael Anthony rocked in their Van Halen years.   You also get numerous Joe Satriani shred-breaks, and you get the funk-infused drumming from Chad Smith (of Red Hot Chili Peppers fame).   It all works for me–better even than the Sammy Hagar era Van Halen did.   Maybe it’s because they are so alone doing this genre right now.  I’m starved for heavy, propulsive, gimmick-free rock n’ roll.

Chuck Eddy reviewed this album in Rolling Stone’s October 13th Issue–describing the music as “big-boned butt rock.”  I don’t have any idea what that means, but I do know that it works on a lot of levels.  Eddy went on to say that “It’s hard to hate big-boned butt rock from guys clearly making it because they still love the form.” I couldn’t agree more, while still not knowing what he’s talking about.  It must be a California thing–that need and expectation to “hate” it before you hear it–and to still diss it, even when you don’t hate it.

What I do know is that the Chickenfoot’s song formula works consistently on multiple levels. Anthony and Smith lay down heavy, funky grooves.  Hagar offers timely, relevant vocals singing about current issues (just like he always has–from “I Can’t Drive 55” to “Right Now” to “Avenida Revolucion”).   And Satriani shreds like a madman–only tastefully constrained to fit the model/song structure.  What’s not to like about that?

Chickenfoot, quite simply, are mature rock masters delivering graduate-level, hand-crafted rock n’ roll music.  If Chuck Eddy sees something different–requiring body parts to form his description–well, to him I’d say, knock yourself out.  Seriously.  Ok, I’m just joking….but maybe you could use some time off. Maybe a trip to Cabo would clear your head and give you some fresh ideas for writing reviews?  They’re only 100-word reviews.

Maybe Chickenfoot left Eddy off the VIP backstage list.  Maybe he got no free shots at Cabo Wabo (Hagar’s famous club in Cabo San Lucas, Mexico–where the band got their start, playing for fun).  Who knows why Rolling Stone critics are so consistently at cross-purposes with my own gut reactions?  Perhaps it’s as simple as critics must be critical.   And I’m not a critic.  I’m a music fan–looking for music that strikes the inner chords. I don’t write if I don’t “feel it” on some gut level.  For me, Chickenfoot just works.  They get me moving every time.

And I don’t think I’m the only one.  My instant, first favorite song, Up Next, was used during the Major League Baseball playoffs during intros.  This album came out last week. Clearly, I wasn’t the only one anxiously awaiting its release.  Some production staffer from TBS/ESPN was doing it too–and went straight for the same song I’d have chosen for an “amping up the crowd”-style intro.

Up Next takes you for a ride-along–on the blistering gallop of Satriani’s lead guitar layered over the heavy rhythm line layed down by Smith and Anthony, while Hagar sings of showing up to the Pearly Gates with his swimsuit and flip-flops on.   Irreverence meets irrepressible exuberance, expectation, and entitlement.  It is classic 80s excess, tastefully refined to a modern sheen.

Big Foot delivers a similar ride-along vibe, only with a slightly slower, funkier but still very heavy groove.  This propensity for heavy, funky rhythm grooves has to be at the heart of Eddy’s “big boned butt” reference.  Anthony and Smith definitely deliver a meaty rhythm framework for Hagar and Satriani to scream, wail,  jam and riff upon.

Chickenfoot also delivers the gold-standard, offering not one, but two quality sing-along ballads–Come Closer and Something Gone Wrong.  Of course, these songs, like the 80s power ballads they are reminiscent of, also rock hard too.   Satriani jams in every context, on each song of the album.  As it should be!

Chickenfoot III is a worthy spin.  If you listen and it doesn’t make you move, I’d say, in the unforgettable words of Texas Governor Rick Perry, “I don’t think you have a heart.”  Or maybe you have a job at Rolling Stone.

You’ll just have to listen and decide for yourself.  Or not. Suit yourself.

PS: Thanks again to Scott Morris for bringing these guys to my attention a few years ago.