The Black Keys – Where Have I Been?

Posted on May 26, 2011 by northernrockiesview

I am not proud of it…but I have to admit that I completely missed the Black Keys until this year.  They’ve been around for over a decade, making killer music, and I had no idea.  I’m an open-minded music fan and am always open to embracing new artists who make music that I enjoy.  But, I had no clue what I was missing.

The Black Keys hit me like a ton of bricks this year for certain.  Upon discovering that their music history dates back at least a decade, I had to ask myself, “where have I been?” and “how did I miss this?”  When I saw them on Saturday Night Live (SNL) in January, I enjoyed both songs that they played, without knowing the names of them.  They turned out to be, Howlin’ for You and Tighten Up (from the new Brothers CD).  As I watched, I made a note to poke around i-Tunes and see what I might find.  A few days later, I bought the Brothers CD.  Upon discovering that I liked virtually all of it, I decided to work back through their library.

Within a week, I owned the bulk of their discography.  The Black Keys are SO in my musical (proverbial) “wheelhouse.”  Blues, riff’n guitars, pounding drums. They are a force in modern music–creating more sound than you’d think two people could generate–celebrating and evolving that, made in the “garage” sound.

As an SNL fan from the very beginning, I’ve heard dozens of artists for the first time on the show.  On a few rare occasions, I’ve bought albums as a result of seeing and hearing something I liked.  But, the Black Keys were the first group that inspired me to buy 5 CDs in 4 days.  Each album was a treat.

The Black Keys are Dan Auerbach, as vocalist and guitarist, and Patrick Carney, as drummer and producer.  They hail from Akron, Ohio.  And they’ve been around the music scene for awhile.  Their music has accompanied some very popular TV shows and movies recently.  It has reached the point of ubiquity, with their music prominently placed in shows and movies from Sons of Anarchy, Eastbound and Down, to School of Rock and the Twilight Series Movies. And I still missed them.

That’s ok though, since it only made it sweeter to discover them in totality.  Their overall body of work is terrific.  They’ve grown over the years, but they’ve also remained true to that which makes them unique.  They rock, they jam, they groove, and they sound way bigger than two people should.  Their sound calls to attention my Zeppelin memories, some occasional Hendrix, some Rolling Stones, and even some classic Jethro Tull, among many other noteworthy influences.

The new Brothers CD is magnificent;

it is worthy of all the accolades it has received (three Grammys, three Billboard Award nominations).  But as good as Brothers is, I like the earlier works more. Usually, you hear that analysis from long-time fans, who compare new works to older, more familiar, well-liked works.  In my case, It just serves as the rationale for the depth of my newfound fandom.  If I liked Brothers but not the previous works, I’d just take them as a band that grew into being worthy of my listening time.  As it stands, the fact that I love their earlier works even more than Brothers, has motivated me to articulate why.

The Black Keys are simple, direct, and straightforward.  Until fairly recently, they were primarily guitar, voice and drums.  Their sound is garage-band-like.  Some have said they are a little reminiscent of the White Stripes, but in my view, they are a little more accessible, less eccentric.  They seem to know that good rock and blues needs no eccentricity. It just needs to be “pounded” out. 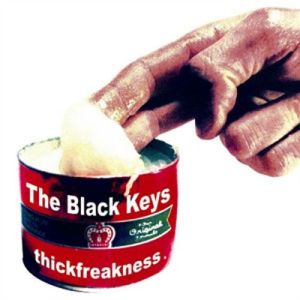 As an illustration of their straightforward simplicity, the band recorded their second album, Thickfreakness, in 14 hours, back in 2003.  Thickfreakness, as the name sort of implies, is full of thick, fuzzy, bluesy, guitar, accompanied by driving rhythms.  In this album, I hear hints of Hendrix, some Allman Brothers, Stevie Ray Vaughn, etc., but the songs I like most are pure Black Keys.  At the top of that list, Everywhere I Go is a blues dirge that became a ski anthem and theme song for me while I explored the “steeps and deeps” of my local “Big Mountain.”

In it, I hear some serious Zeppelin homage, from the guitar riffs on Just a Little Heat and Goodbye Babylon, to the relentless pounding/driving drums on Modern Times and Goodbye Babylon.  The similarities ring my “familiar” bells in a way that is undeniable.  John Bonham drummed with a distinction and zeal that yielded perfection throughout Zeppelin’s entire catalogue (for a classic example, focus on hearing the drums only while listening to Stairway to Heaven). On Magic Potion, Patrick Carney captures some of that same Bonham’ zeal.  The drums sound heavier, more insistent, like they must be that way, to drive the insistency of the blues riffs.  It all works. 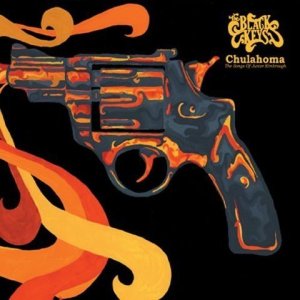 Around the same time-frame as Magic Potion, the band also released Chulahoma. Chulahoma features the songs of the late Mississippi bluesman, Junior Kimbrough.   While this is probably the least commercial album in their discography, it does increase their “blues” credentials on some level.  An interesting track on the Bonus version (of the CD), is a phone call from Junior’s widow Mildred, praising the Keys as being one of the only bands to play his music “like Junior played it.”   She was very proud of it.  I’d say they can all be proud.  It is true blues–earnest, captivating, and hypnotic even.  I didn’t know Junior’s music before, but because of the Black Keys, I now do…and like it.

In 2008, the Keys put out Attack and Release.  This was seemingly the beginning of their expansion beyond just the two of them.  Working with Gnarls Barkley’s producer ‘Danger Mouse’, the Keys also had a number of collaborators, vocally and musically on the record.   Adding keyboards, flutes and background vocals to the blues duo’s core sound was a winning formula too. It just broadened and deepened their repertoire, setting the stage, paving the way for the meteoric success of their follow-on album, the new Brothers CD.

The success of 2010’s Brothers CD was apparently the impetus for SNL to bring on the Black Keys as a musical guest.  And once again, SNL has proven to be of continuing relevance. More often than not, it’s the comedy that produces the water-cooler discussion. In this case, SNL gave me a centerpiece for this ski season’s soundtrack.  If you have any affinity for Rock and Blues and you haven’t heard them before, give the Black Keys a spin.   You won’t regret it.

The Black Keys Discography and my “Best of” Playlist follow below:

My “Best of the Black Keys” playlist goes like this: